As rehearsals officially begin today (18 August 2016) in London for BUMBLESCRATCH, here are quick character studies of the four lead rats and a few details you may not already know about the actors playing them: Darren Day, Jessica Martin, Michael Xavier and Ilan Galkoff. Character development like this always starts as handwritten notes from my library of red notebooks. I daren't tell you what volume I'm up to now!

“Melbourne Bumblescratch” is the title character and it’s really his story, told from his point of view. He sees London as this gruesome, seedy place... It's a cesspool or, as he says: "London is a seething vat of intrigue and suspense." But from a disgusting plague rat’s point of view, these aren’t words negative description, these words equal joy and wonder.  London something to celebrate. It's his golden age.
Darren Day, who plays Melbourne Bumblescratch, shares something in common with me: He’s exactly one day younger than I am. Maybe that's part of what helps me see a little bit of Melbourne in him, because there’s a little bit of Melbourne in me.

“Bethesda” is Melbourne Bumblescratch’s long-suffering fiancé. Although he’s given her a ring, somehow his ring seems to conveniently slide off whenever Melbourne is on his way to the pub. But Bethesda takes no prisoners. She loves Melbourne, and feels alienated because of his lack of commitment, but she's also hard as steel. Bethesda has some great comic moments in the show. Jessica Martin, who plays Bethesda, is, like Darren Day, well known for her master impressions.  This skill serves the comedy in the part well.

“Hookbeard” is the ghost of a rat pirate. You might say that he’s Melbourne’s guardian angel (or perhaps more accurately, his “guardian demon”).  But if he is a demon, then he’s a benevolent one. Cursed to wander the world alone, he is Melbourne’s “Ghost of Christmas Yet to Be” to put it in Dickensian terms. The rat pirate demonstrates to the audience how empty Melbourne’s future would turn out were Melbourne not to change his wicked ways. Hookbeard’s is a life of adventure, to be sure.  But it’s an empty existence without family or real roots.  Indeed we learn that Hookbeard secretly delights in being called upon for help by his old friend, Melbourne. Melbourne is Hookbeard’s raison d'être. The rat pirate first appears in Act I, during one of Melbourne’s nightmare hallucinations. Hookbeard has become a legend in the world of London’s rats. His curse is that he wanders the world, unable to put together the pieces of his own past.
Michael Xavier plays Hookbeard. He is a rising star in the West End, not just for the performances he’s given but also for the lauded West End Masterclass which he founded for teen actors who want to enter show business.  Michael boasts a strong baritone and loans the character of Hookbeard a little of his own West End mystique in the bargain. I saw Michael most recently in Sunset Boulevard where he played terrific counterpoint to Glenn Close.

I’ve always tended to start writing shows by creating the characters first.  And “Perry the Plague Rat” was my initial inspiration for BUMBLESCRATCH and the first character I created. He’s an orphan rat-child, a youthful persona of Melbourne, and the initial catalyst for the journey through London upon which Melbourne takes us.
One nuanced aspect about Perry’s character treatment which I like to point out is how he’s introduced to the audience. In my shows I always try to give the characters, what’s called a “star entrance”.  Melbourne starts the show in spotlight. Hookbeard alights the stage off a grand and magical dragon ship. Socrates, the evil King Rat, enters literally via trumpeted fanfare. Bethesda enters screaming at Melbourne and you can’t take your eyes off of her. And Perry, the second busiest character in the show by contrast, uniquely, gets no star entrance.
You first see him in the opening number and his presence seems almost incidental. Melbourne pays a little bit of attention to him in passing.  Then with each progressive scene, Perry gloms on more to Melbourne.  He won’t let him go.  Allegorically speaking, Perry represents Melbourne’s repressed childhood memories.  Melbourne must deal with his past before he can move on to a happy future. Perry is a subliminal, so that’s how we introduce him – a niggling, annoying thing that must be dealt with. As Melbourne learns to accept himself, his affection for Perry grows.
“Perry” is an extremely dynamic role, especially for a child. With many children's parts, even leading roles, there’s not much of a character arc. Take Lionel Bart's Oliver!, for example:  How much does Oliver grow in the story? In BUMBLESCRATCH by comparison, Perry begins as an innocent, falls in love, and gets to explore a number of other emotional corners to his personality.  I don’t think there’s a broader role out there for a juvenile to play.  We learn a tremendous amount about him in a relatively short space of time.
“Perry” is played by Ilan Galkoff, who just turned 13. Ilan originally auditioned for the 2013 workshop but was a bit young for the role at that point, but there’s no doubt that he has really grown into the part.
*****

All the characters in BUMBLESCRATCH suffer a similar sense of isolation. This wasn’t planned, but rather was something I observed when I finished writing the first draft.  I had written it subconsciously into the characters. It was a common thread, no doubt connected to feelings I was grappling with when I wrote it. Isolation is a key theme undercurrent in the BUMBLESCRATCH storyline and in the make-up of each of its central characters too. 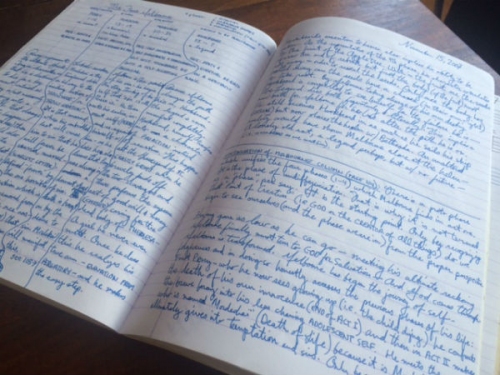