2018-11-27T08:34:39+00:00
Below, is part 3 of Robbie Sherman’s 3-part blog about his visit to Pinewood Studios commemorating the 50th Anniversary of the theatrical film release of Chitty Chitty Bang Bang.

Finally, called to the stage were ADRIAN HALL (who played “Jeremy”) and HEATHER RIPLEY (who played “Jemima”).  It’s hard to believe that “Jeremy” and “Jemima” are now both grandparents!  They recounted both the joys and demands of their involvement with the film.  They had worked on the film for 14 months - which makes sense when you incorporate rehearsals, pre-recordings, fittings, more rehearsals, filming and then promotion!!  Also none of the modern child protection rules were in effect back in 1967.  They told of how the sewer children were left to stand, shivering in the snow while scenes were being set up to be shot!

When it came time to publicize Chitty in late 1968/early 1969 Heather and Adrian were brought on a whistle stop tour across the United States, literally landing in an airplane at 6AM and going venue to venue to promote the film.  The day would often begin on an airplane and end on one at 10:30pm at night!  Madness.  They also talked about how generous and kind producer CUBBY BROCCOLI was with them each.  They stayed in mostly 5 star hotels while on this promotional junket and received some lovely gifts.  Cubby did that for kids.  My sister Tracy shares the same birthday with Cubby’s daughter BARBARA BROCCOLI (off by one day).  Cubby and his wife DANA held a joint birthday party for the two girls.  But I digress.  Anyway, all in all, Adrian and Heather shared some absolutely fascinating insights into the day-to–day making of Chitty.

After the panels, we were lead through the studio lot, to the JOHN BARRY THEATRE where we watched the movie on the big screen.  This was a completely new experience for me, I have to say.  And certainly one of the highlights of the day.  I strongly believe that Musical films must be seen in movie theaters whenever possible.  Musicals by their very nature are larger than life, hence the need to see them on a proper sized screen with great sound!  That said, I must confess, I’ve only seen a handful of my father and uncle’s films in a proper movie theatre setting.  Let me just say, if you are a fan of this movie, and you get the opportunity to watch it on the big screen, TAKE IT!  The level of detail in Chitty as a film is stunning and indeed unparalleled.  The truth is, I can’t think of another film where the props are so much in the forefront.  It’s not just the car, it’s everything from the (working) breakfast making machine (which is featured in the song sequence, “YOU TWO”) to the magnificent car to the Baron’s Zeppelin—  and so many more things.  Watching the film, you wanted to have the projectionist freeze frame scene after scene, just so you could take in all that was going on.  That said, I don’t know if it was just this print, but the presentation could use a GILES MARTIN type engineer to clean up and remix and master the soundtrack.  Experiencing the film in this way, some of the flaws also pop out.  Some of the vocals in the songs seemed muffled.  It was clear when songs were recorded indoors (and the filming was outdoors).  All of this should one day be revisited in a remix.

I would like to say that I was also impressed by the caliber of fan who attended the event.  It seemed that almost everyone I spoke to either ran a theatre company or was a working film maker or musician.  I don’t know whether it was a coincidence or not that the caliber of Chitty appreciator at this event was an interesting person themselves.  It seemed that everyone with whom I spoke, I wanted to speak to longer.

At the end of the day, just as I was about to go home, Heather invited me to join her and Adrian for dinner at a nearby hotel restaurant.  It was a lovely end to a lovely day.


You can read Part One and Two of this blog here: http://robbiesherman.com/view/chitty-turns-50-
Back to news 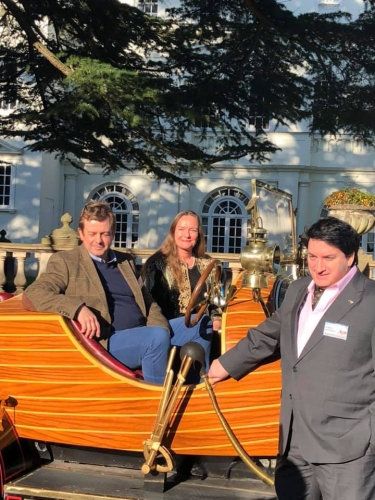