2018-11-21T17:48:13+00:00
Below, is part 2 of Robbie Sherman’s 3-part blog about his visit to Pinewood Studios commemorating the 50th Anniversary of the theatrical film release of Chitty Chitty Bang Bang.

Throughout the day, conventioneers could sneak away to a room dedicated to CHITTY MEMORABILIA. Autograph seekers could get signed photos from people involved with the film.  DAVE HINNETT brought some of his massive collection, some of which was on sale.  Some amazing stuff… Chitty games, Chitty LPs in dozens of languages, books, throw rugs, photos, model corgi cars, paintings, you name it!

Then came lunch….  Well….  It looked great, and folks seemed to like it, but all I could really eat were the vegetables. I drank a lot of coffee and sparkling water too, as I’m on a particularly peculiar and restrictive diet at the moment. After lunch there was a panel discussion. First I was brought up to the stage and interviewed. (A big honor, as I was the only participant who DIDN’T actually work on the film) Obviously I was there to represent my father and uncle. I told a few stories related to the Sherman Brothers' experience and perspective of Chitty. I discussed how Producer CUBBY BROCCOLI first approached WALT DISNEY to co-produce the film with him back in 1965. I explained how Walt let the Sherman Brothers work on the film despite still being under contract to the studio; how the film meant that after Walt’s death, the Sherman Brothers continuing musical writing career was insured, and how the hit West End stage version of Chitty resurrected interest in the Sherman Brothers and precipitated my father’s and indeed my own eventual move to London.  I also discussed some of the songs, pointing out some of the brilliant irony in “Chu Chi Face” (This title, “Chu Chi Face” is a yiddish term of endearment sung by two proto-Nazi sado-masochists).  I pointed out how “Me Ol’ Bamboo” is an ingeniously quirky idea for musical number, all about people who rely on some form of stick or cane in their day to day lives.  I explained that this was a clever albeit lighthearted self-ode to my father’s own use of a walking stick which he needed since his time in the service during WWII.  There was so much covered and it seemed generally well received, if I do say so myself.

After I spoke a few representatives from the original Chitty crew came up and provided some fascinating insights as well.  The funniest story we heard was about Baron Bomburst’s Zeppelin.  Apparently it was a nightmare to control. On possibly more than one occasion, the film shoot had to be postponed due to the Zeppelin flying away (sometimes diagonally). Clearly it must have been a sight to see!  Apparently people all over the south of England were calling the local authorities to complain about it!  Members of the original film crew, who were in attendance included:  DICKIE BAMBER (Assistant Director: title sequence \ Set Dresser), PETER LAMONT (Assistant Art Director), GRAHAM HARTSTONE (Sound Camera Operator), MARTIN BODY (Assistant Camera), BRIAN COOK (Second Assistant Director), LAWRIE READ (Sound recordist and ADR), MICHAEL REED (Director of Photography: title sequence), LES TOMKINS (Draftsman), RONA BROWN (Animals) and VIC ARMSTRONG (Stunts).


In the third and final installment of this blog, Robbie talks about the (now all grown up) child stars of Chitty who were also on the panel plus the film presentation.
Back to news 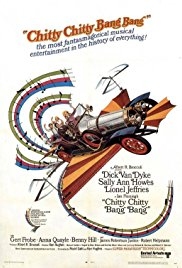