The BUMBLESCRATCH Official Cast Recording (OCR) is officially released today! To celebrate, in this second in a series of CD-related blogs, Robbie considers the importance of making OCRs and why they're so collectable.

Making cast recordings is important.  To simply suggest that they are the “best souvenir” you can take from a show, doesn’t do the institution justice, but at least the words come close. You see OCRs ARE an institution.
I’ve made an effort to produce an OCR for all my shows. And they’re hard to do, but they’re worth it!  Making them certainly provides the best safeguard for preventing a show from becoming ‘lost’ or forgotten.
For those who can’t make it to New York or London or wherever to see a show live, a cast album provides a window into the world of that production.
For those who did see the show, it’s an amazing memento. Perhaps the only thing you can really take home with you from a musical are the songs. Sure, you can take memories of the story or a performance, but you can’t bring home the sets or the costumes from a show.  But when you leave the theatre, you CAN sing a song and a cast album helps preserve that.  You can take THAT performance home with you.
For a show to have a future life, the album is also an incredibly important tool to have. It works as a sales tool.  A fistful of reviews, a programme, a script, a concept: they don’t really communicate the nature of the finished product or share the excitement of the experience. A glossy, professional-looking CD does – or at least it can.  And recorded shortly after opening night, as so many cast albums are, preserves a bit of that spark…  the magical energy of a show that’s new and fresh.  The inspiration is still there.  It’s raw and it’s real.
The main pressure with a cast album? There’s so little time to make it! If the show is enjoying a long run, you’ve only got your daylight hours to do the recording and the night-time hours are dedicated to the live performance! It makes for a busy few weeks when producing an album like this.  If the show only runs a short while, then you need to gather the cast together immediately, really, otherwise they’re all off, scattered on the four winds doing different things. So it’s a moment in time that you are proposing to capture – to preserve.
And that’s another thing that can make these albums so special, I think. You could write tomes on all the glitches to be found on cast albums – the harmonies that went awry, the piano part that’s missing or the mysterious trombone line that somehow snuck its way onto a track that no brass part was even written for. You listen and think, how did that happen? From my point of view, it’s those very imperfections that can make an OCR that much more special and memorable and all that much more fun to listen to.
BUMBLESCRATCH is officially released on Monday 19 December 2016. It's available to order in physical format from www.SimGProductions.com now and available digitally in early 2017. 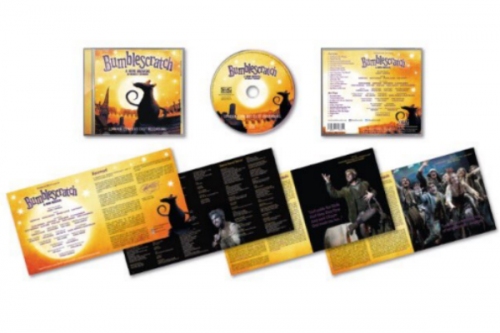