Three years on, it’s time for another Spoonful of Sherman

A Spoonful of Sherman, which premiered in 2014, returns to the London stage in August – but it’ll look and sound different this time round. In the third in a series of show blogs, Robbie Sherman talks about changes to the 2017 presentation.

As I mentioned in my last blog, A Spoonful of Sherman was originally created as an event to launch my father’s memoir Moose: Chapters From My Life. I thought doing a sort of “musical memorial” was a really nice way to do that, my father having only passed away a year earlier. What I didn’t anticipate was how well received the show itself was going to be – and the demand that might create.

In early 2014, we only did it for two nights originally, at what was then the St James Studio (now The Other Palace Studio) in west London. But the show did so well, and received such great reviews, that the theatre asked us to come back for a longer, return engagement a few months later.

Since then, I’ve had several approaches about bringing A Spoonful of Sherman back to the stage, but I’ve been busy with other projects and the timing never quite worked out.

This time, I couldn’t turn down the invitation. It came directly from James Albrecht, who was the Creative Director at the St James when we had such a happy time with Spoonful in its first incarnation.  Now James is running Live at Zedel.

James was looking for the right content for his summer season. Because of the nature of the Sherman material, it’s a perfect family show and James thought August during school holidays would be an ideal time to do it again. Zedel is a renowned cabaret venue, one of the most beautiful rooms in London – ours will be one of venue’s longest straight runs for a show, if not the longest.

A Spoonful of Sherman runs 7-20 August 2017 at London’s Live at Zedel. Click here for tickets.
Back to news 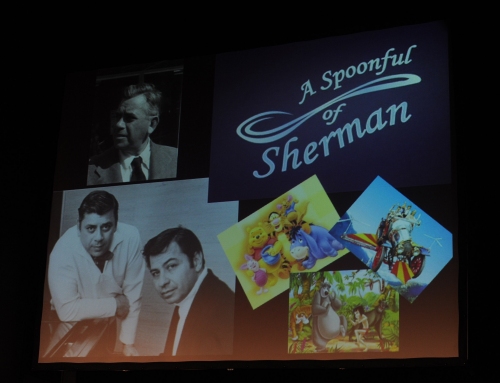