The making of the Bumblescratch CD

In this first in a series of blogs on the BUMBLESCRATCH cast recording, Robbie looks back on the intense work that went into creating the release and some difficult decisions, not least to do with the physical limitations of a CD.

It was decided early on that we would create a cast recording of BUMBLESCRATCH. The challenge was: what to include and what not to include.
There was one consideration that had to be reconciled: physical limitation.  Established in the 1980s, the maximum length of a CD is 74 minutes. If you try to make it longer, the CD might or might not work on some players. BUMBLESCRATCH being a sung-through musical meant we simply couldn’t include every music cue from the show.  So we had to be disciplined and, in some cases, I hate to say it, ruthless.
In performance, BUMBLESCRATCH was nearly two hours – 116 minutes to be exact – a lot longer than 74 minutes!  And it’s not a well known show, at least not yet.  For this reason there really was no commercial justification for producing a double CD.  So the plan was to make it a “highlights” album.  But the album also had to provide the first time listener with a clear sense of storyline as well.
I believe that Musical Comedy fans are specifically listening for the narrative – the character development.  That is to say, they like to know the storyline.  If it were a pop album, the songs would be judged one by one, but not so with a show album.  I felt I owed my listeners context – and just giving them liner notes wouldn’t suffice.  Even some reviewers don’t bother to read the liner notes very thoroughly nowadays.  So the choice of songs also had to illuminate the basic storyline and also be varied in style.  Just choosing the “best songs” wouldn’t be adequate.
So to start the process of choosing which songs to include, I put together a list of the numbers I most wanted in the album.  I discussed my choices with BUMBLESCRATCH director/choreographer Stewart Nicholls and musical director Tom Kelly. We settled on 24 tracks from the show, some of them truncated versions. We cut out dance breaks and instrumental sections, but listeners could get a clear sense of the storyline and a tasty variety of songs.
The songs I most regret taking out of the line-up were “Storyteller”, “The Widow MacGregor”, “Don’t Eat Bad Cheese” and “We Will Live To Be Free”.  Poor Teddy Moynihan who had done such a stellar job playing the part of Squabbler in the show and was now relegated to (what would appear to be a chorus part), if all one were judging him on was what was on the CD line-up.  I felt particularly awful about those cuts.  He was a good sport about it, though, which I will always appreciate.
The week after the show was staged in the West End, we spent two days recording at Angel Studio in (Islington) London – a beautiful space, famous, a place of legend really.  Angel, coincidentally was a converted Victorian church. Our recording sessions consisted of two ten-hour days with the full cast and orchestra. Tom’s schedule was draconian out of necessity.  There were no five minutes that weren’t spoken for.  It was quite an operation.
It was easily the biggest recording session I've ever personally produced. I've attended much bigger sessions on my Dad’s projects. But it’s one thing to watch or even assist; it’s quite another when you’re actually in charge of the sessions.  It was a whole new scale of operation for me.
Most of my records have been done with a three or four piece band - a piano, drums and bass, then singers.  This was the configuration for the Edinburgh Love Birds album, for example.  And it can be a great, full sound!  No question! But the BUMBLESCRATCH sessions required a ten-piece orchestra plus conductor – with Love Birds the MD (Musical Director) was also on keys.  Not so with BUMBLESCRATCH.  It was such a large job, our orchestral contractor (aka “Music Fixer”), Nick Norton Smith was on hand throughout the sessions, just in case we needed to contract the musicians for overtime.  Everything had to go by union rules. Working at this scale was at once a thrilling and a daunting process.
After the recording was done, we required additional days for editing and mixing and then mastering.  I worked closely with veteran engineer Niall Acott, Tom and Orchestrator/Vocal Arranger Rowland Lee. Rowland was indispensable during this part of the process!  There's such a tremendous amount of work that goes into the editing and mixing phase of recording. Mastering was done by another terrific engineer and friend, Kevin Porée.  We mastered the CD in his home in Canterbury.
I’m pleased that we were able to include one or two songs from most of the leads. My personal highlights include: “Music of the Spheres” and “My Place in the Sun”, sung by Darren Day; “I Cannot Hear You”, the comedy “patter” song sung by both the main character, Melbourne and his guardian angel, Hookbeard the rat pirate, sung by Darren and Michael Xavier respectively; and “Adorable Me” and “That’s Something” sung by Ilan Galkoff as “Perry”, “Long Long Road” performed by Jessica Martin with the ensemble, “Beautiful Now” performed by our Thamesa, Cathy Read and, “Socrates’ Scorn” featuring Jacob Chapman as Socrates, the King Rat.  And two ensemble pieces: “Thank You Sir!” and “At Least A Rat ‘As Got An Excuse!”
BUMBLESCRATCH is officially released on Monday 19 December 2016. It's available to pre-order in physical format from www.SimGProductions.com now and available digitally in early 2017.
Back to news 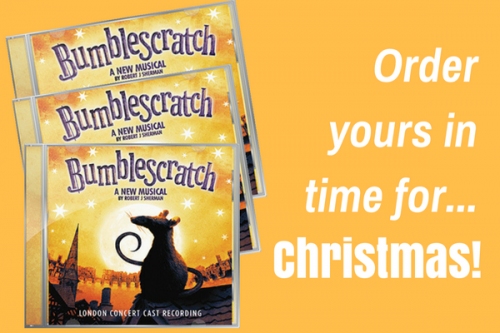