The challenges of writing sung-through musicals

BUMBLESCRATCH is a sung-through musical. Since I was small, I knew that I wanted to follow in my father’s, uncle’s and grandfather’s footsteps and write musicals. But one piece of unchartered territory, at least for Shermans, was writing sung-through musicals (or opera). So I made it my goal that I would one day write one! And it’s been a sort of bucket-list challenge for me ever since.

When the subject for BUMBLESCRATCH presented itself to me – a highly dramatic piece starting with the Great Plague, people suffering and dying, and ending with the Great Fire – I thought there was enough dramatic fodder to support continual singing.  (It’s hard to write convincing music and lyrics about mundane matters.)
One of the biggest challenges in writing a sung-through piece is creating the segue scenes. In any type of writing, you have to include expositional moments; moments when you explain where you are, what you're seeing, who the characters are. The trick is: how do you make these exchanges intensely dramatic enough to justify the characters singing about them?
In a sung-through musical or opera, there are two main types of music: the aria - an identifiable song or big number; then there’s the recitative, which is effectively the dialogue sung. Most modern sung-through pieces will break into dialogue momentarily.
One of the downsides of writing a sung-through piece is that your editing process, which is so critical, is artificially constricted by the variance which the music needs to supply. You see, if you play two slow songs in a row, you’ll send your audience to sleep. Contrarily, two fast songs in a row stops being clever, it just feels nervous and frenetic. So the aim is, in simplistic terms: do a fast number, a slow number, fast song, minor key, major key, and mix it up like that.
The minute you start to lose numbers in a sung-through piece, though, (through editing), you can easily end up with two slow songs in a row, two minor-key songs in a row, or the like. So making elegant edits becomes much harder. You're servicing the preservation of sonic variety rather than the storyline.

What are the musical styles in the piece?

I think BUMBLESCRATCH is mainly my own style. I have tried to retain hints of 17th-century music as well: think Purcell or earlier chamber music like Greensleeves, with some nice flutes, double reeds and harpsichords. And there are moments of musical premonition, where you’ll hear what sounds more like a Bach cantata. I utilize a specific type of musical device, popular with Bach, called “counterpoint”. Hearing it evokes a sense of the period, while at the same time serves the storytelling.
You may have to be a musicologist to notice, particularly on first listen. It’s subtle, but it’s there! It's something my father and uncle did very well, by the way, with songs like "Doll on a Music Box" which was counterpuntal to "Truly Scrumptious" in Chitty Chitty Bang Bang. The two melodies overlap to become one larger whole, their juxtaposition to each other told a larger story. The whole becoming greater than the two parts.
You’ll also hear a Beatles influence in BUMBLESCRATCH! I’m a big Beatles fan. Also, they’re so quintessentially British, it seemed to make sense in this twisted telling of history, to use more modern musical references as well. So it’s a real mix.
The musical orchestrator, Rowland Lee, has been enjoying playing around with my various period concepts. He’s really bringing all of the these ideas to life with our ten-piece orchestra. Tom Kelly, our music director, is shaping the piece up brilliantly too.  It’s going to be a very special sound – a very special evening, I think. 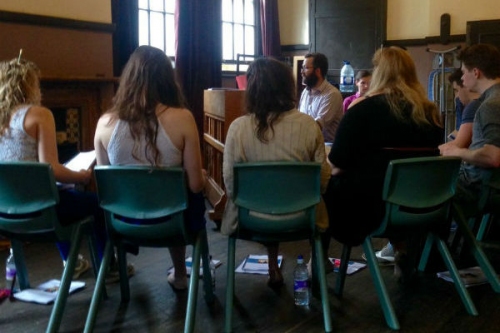