2018-03-19T09:47:05+00:00
With his hit celebration of one of the most successful and creative dynasties in musicals, A Spoonful of Sherman delighting audiences across the country, Musical Theatre Review’s Susan Elkin caught up with ROBBIE SHERMAN to talk about his illustrious family business.
As the son and nephew of the famous Sherman Brothers, Robert B and Richard M, the team behind the timeless songs from the soundtracks of classic movies including Mary Poppins, Chitty Chitty Bang Bang and The Jungle Book, Robbie Sherman is perfectly placed to tell the story of a musical family which began with his grandfather Tin Pan Alley writer Al Sherman who wrote songs for Al Jolson, Frank Sinatra and Billie Holiday, and focuses on the songwriting brothers who created more movie musical songs and acclaimed film scores than any other writing team.

Sherman conceived the show as a way to celebrate the family legacy and mark the publication of his late father’s posthumously published book Moose: Chapters From My Life. “It’s a musical about the Sherman family – a happy memorial. My dad died in 2012 aged 86 and I’d been working on the book with him, but I didn’t want a book launch without him there,” he explains.

The revue-style show was first performed in London in 2014, coinciding with the release of the Mary Poppins-inspired film Saving Mr Banks.
“A Spoonful of Sherman got a lot of press including a four star review in The Times,” recalls Sherman. “Then the St James Theatre, now renamed The Other Palace, wanted it and it took on a life of its own. Suddenly there was quite a buzz.”

Explaining that the show is designed to be flexible, allowing it to be scaled up to fill the Royal Albert Hall or played intimately in a small space, Robbie says: “The current touring show is a five-hand revue. Two of the performers are pianists as well as singers. It uses costumes and a fairly elaborate set”.

The show has proved to be a hit with a wide family audience: “Everyone knows and loves the songs. Audiences typically include over eighties and quite young children because any age can identify with the material,” says Sherman.

Describing the format of the show he adds: “The first act explores the Sherman myth – these two brothers whose father, who worked in vaudeville and later in Tin Pan Alley, was determined that his boys should work together as songwriters. The second act deconstructs the myth and looks at what happened once the Sherman parents and Walt Disney had gone and things got tougher.”

The birth of home video brought the Sherman Brothers’ work to a new generation, with Mary Poppins and many of their other films proving exceptionally popular. “Not that Dad got any money out of that” Sherman says wryly, “when 1960s contracts were drawn up, video hadn’t been invented and sales therefore not covered.”

Working closely with his father over the years, he recalls arriving in the UK in 2002 after his father was invited to work with Adrian Noble and his team on the stage version of Chitty Chitty Bang Bang at the London Palladium.

Reminiscing about his and his father’s involvement in the high-profile musical production, he says: “It did us a huge favour. My mother, Joyce, had just died and Dad really needed a new project so we moved to London where I worked in the background as his business manager. To this day my day job is really managing his estate.”

Now living in London, Sherman admits enjoying life in the city: “I come from Los Angeles which thinks it’s the centre of the world but isn’t, so I feel very at home here in Mayfair where I rent. There are lots of good restaurants, the bar at the Dorchester is my local, and there’s theatre on the doorstep.”

While ensuring his family’s legacy is protected, Sherman is also an accomplished songwriter in his own right with plans to develop his show Lovebirds which proved to be a hit in Edinburgh in 2015.

“I want to build Lovebirds up to a full length two act show, but I’ve been a bit waylaid by Spoonful recently,” he says. “From infancy I passionately wanted to follow in the family footsteps and write songs, so Dad taught me piano and I had piano lessons. Then I learned chords, how to blend melody lines and I did a lot of analysis.”

Picking up trade tips about lyric writing from his father, the younger Sherman studied screenwriting in his undergraduate degree at University of South California and even commuted weekly from London to New York to attend top flight musical theatre workshops.

Asked if he composes his songs at the piano, he says: “Sort of and sometimes… I often think of a melody or a good lyric while I’m taking a walk. So I record it on my phone immediately before I forget. Then later I sit down at the piano and work it out properly.”

Finally, I broach the subject of his personal life. Is there a partner or even a fifth generation of  musical Shermans ready to carry the baton forward? “Alas no. Not yet. I’m a lone traveller,” says Sherman with a rueful chuckle.

“Looking after my father and his affairs has consumed almost all my time for some years now. But I hope that one day I’ll meet the right girl…” 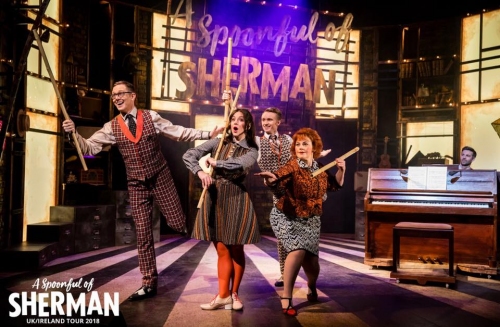