After working with Michael Xavier on BUMBLESCRATCH in September, Robbie was delighted to be invited as a special VIP guest speaker at Michael's pioneering Musical Theatre Masterclass. Here's more information on this great programme and Robbie's participation...

Musical Theatre Masterclass (MTM) invited Robbie as their first speaker at a special VIP Masterclass this month. MTM is the brainchild of double Olivier-Award nominee Michael Xavier, renowned for numerous leading West End roles including starring opposite Glenn Close in the recent Sunset Boulevard (ENO).
Students at Musical Theatre Masterclass, a new musical theatre training academy in London, got the chance to have a special VIP Masterclass with Robbie, on Sunday 2 October 2016. The Masterclass is part of a series of three one-hour sessions each Sunday with other Masterclasses in singing, dancing and acting – all taking place at The Umbrella Rooms in London’s West End.

MTM has resident acting, singing and dancing coaches, but also invites current star performers to come in and give Masterclasses, and each term culminates in a showcase attended by invited agents, casting directors and other luminaries of the industry. There are also performance opportunities with students getting a chance to perform in Trafalgar Square at West End Live in the summer and in a Christmas charity concert each year.
MTM is designed for aspiring Musical Theatre performers from age 12 to 25 years and aims to get them ready for a career on the stage, or to be successful in gaining a place at one of the highly competitive Musical Theatre further education colleges. It is aimed at young performers who have lots of raw talent and a huge amount of potential in singing, dancing or acting.
Students are hand-picked from an audition process, and those already training at MTM include some young performers who already have a list of impressive credits to their name, and are even currently appearing in the West End and filming blockbuster films. However, they do not have to have had professional experience.

“We are looking to develop that raw talent and so we give places purely based on an audition process when we determine the level of ability and potential. It’s fantastic that we have attracted young people who are already working in the industry, and it’s great to help to develop their talent further, but it is also hugely rewarding to be part of a team that nurtures fledging talent that has not yet been recognised. We also want to give students with no professional experience the skills and confidence to get onto that first rung on the ladder. A significant part of what we offer is inspiration – and our star guests provide that in spades.”

“Michael’s masterclasses are a great opportunity for young people – My aim for this session is to give the performers an idea of what the audition is like from the other side.  What are the writers, directors and music directors thinking?  And more importantly, what can the performer do to maximize his chances at making the right impression in those critical moments. I am really honoured and thrilled to be a part of the first session.” 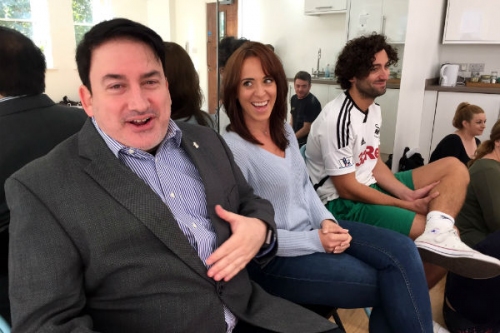