In the second of a series of blogs to tie in with the release of the MOOSE audio book, Robbie recalls the process of recording more than eleven hours of reading aloud and the voices in his head, including his father's and Walt Disney's.

After the print edition of MOOSE was released, I was approached about releasing it as an audio book as well by Orchard Hill Publishers. They asked me to do the reading.
It was a lot of work, much more than I had anticipated! We set up a little homemade studio in my living room and I read the entire book, cover to cover over a period of many weeks. The book is 450 pages, which turned into 11-and-a-half hours of spoken word.
But you don’t just open up the book and read out loud, straight through for half a day. On a really productive day, the most we’d be able to get through would be 35 to 40 pages. And I’d be hoarse at the end of it.
We recorded in chunks, about a page and a half at a time. Before we’d press “record”, I'd read through the section for practice, to get my mouth around the words and how to express them. If you don’t practice, you can get sloppy; if you practice too much, you can start to sound too familiar and bored.  Too much practice can also make you sloppy or lose focus.
There is some dialogue in MOOSE, so I had to assume different characters’ voices to a degree, like in a script. Sometimes, those characters spoke in French or Spanish. I definitely don't speak French or German so I had some friends help me with the foreign pronunciations.
There’s even a chapter where I’m imitating Walt Disney a little bit too – we knew the Disney-philes would enjoy that. We chose that five-minute excerpt as the Audible audio sample on Amazon.
Spending so much time inside Dad’s head during the recording of MOOSE, and looking back over the photos again, could be quite difficult emotionally, at times. I still miss him.
The whole process was not as straightforward as you might think; not least, of course, because I’m not an actor. With the recording and daily editing, it took about two months in total. But I think it comes across well. As my father would have liked, it’s very personal and it’s spoken just as he wrote it.

The audio book of MOOSE: Chapters from My Life can be ordered via Amazon here and via Itunes here. 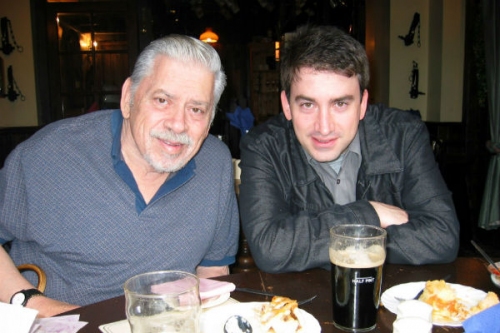