Rats not Cats: “Rats terrify and disgust me”

Frankly, I can't stand rats, or mice: they terrify and disgust me. So why write a musical about rats like BUMBLESCRATCH? Shakespeare’s Globe is to blame.

I was in the gift shop there after seeing a history play. There, on display, was a prominent rack of plague rat puppets for sale. Now, I love puppets. This puppet display had a sign saying "plague rats", and I thought that was peculiar.
In the States, where I’m from, no one would ever mass promote a rat – and certainly not a “Plague Rat” – and never for children. Not so in this country. Here you have pubs called The Rat and Parrot. An eating establishment called The Rat?! You just wouldn't see such a thing in America.  Something about it amused me. Immediately a name popped into my head: "Perry the Plague Rat" and I thought it was very funny.
Though I deal with serious issues in BUMBLESCRATCH, it's very much a tongue-in-cheek story. I’d seen Les Miserables and wondered: "How could you write anything darker than that?" There was my challenge!  So, in part, it’s a sort of homage to Les Mis, but it’s even more miserable: it’s all about the plague and everybody dies.
Sweeney Todd also influenced me. Sweeney hates London, he despises it. What if my character loved London? What if he loved this falling down, crumbling, thatched roof, Tudor London. The rat is a metaphor for London in that time: sick, squalid, infected… Infectious! I thought, "A musical about a layered, serious anti-hero. Wouldn't that be something?"
Melbourne Bumblescratch (played by Darren Day) is not a particularly nice character. He's nothing like Jean Valjean in Les Miserables, for instance. Valjean steals a loaf of bread, and feels guilty about it for the next sixty years of his life. He was a saint really. I wondered what would happen if you wrote a show around a dishonest character, a Salinger-style, unreliable narrator. Melbourne Bumblescratch lies to everybody he meets. He even lies to his guardian angel, Hookbeard (played by Michael Xavier). 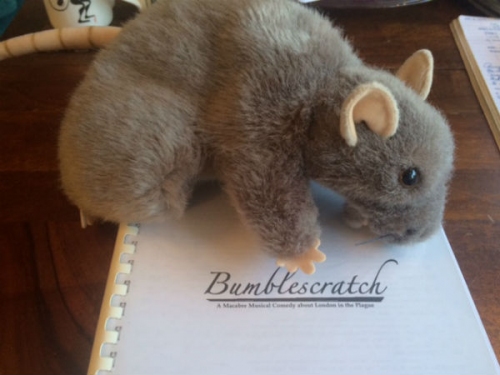