Marking the 50th anniversary of The Happiest Millionaire

In the first of a two-part blog series, Robbie Sherman applauds the Disneyana Fan Club’s recent anniversary retrospective on the 1967 film with songs by The Sherman Brothers.

This is, at least in part because it was the last live-action film that Walt Disney would personally supervise. (Walt died in 1966 while the film was still in production.) For enthusiasts interested in this period of Disney history in particular, the many signs of Walt’s influence are present.  It’s evident in the quality of the production as well as the humanity apparent in the characters.

Keeping the spirit of Walt Disney alive - Walt Disney the man that is, not so much the corporation - is very much at the heart of what the Disneyana Fan Club is about, so it made sense that they would specifically honour this film and its release – and especially now at its 50th anniversary.

To demonstrate how important The Happiest Millionaire was to Disney folks, there have been no fewer than three different cuts of the film available to fans over the decades on both video and then DVD.

In Anaheim, California in February, Disneyana held a once-in-a-generation event, a retrospective honouring the late, great screenwriter AJ Carothers, and his wife and son spoke. His wife, Caryl Carothers, recalled many of her memories from the time. Their son, Christopher Carothers - who is an actor and singer in his own right performed a couple of the songs from the movie.

Sadly, I couldn't be there; however, in lieu of attending, I sponsored an exclusive performance of The Dapper Dans' barbershop quartet at the event.  I did this in honour of both my late father and my uncle (who was scheduled to attend, but couldn’t due to a back ailment). The Dapper Dans sang five Sherman Brothers songs. They opened and closed however, with the official Disneyana Fan Club theme song, which I wrote and which the quartet also premiered in a live performance for the DFC, back in 2015.

After the opening number, they sang "That's What Friends Are For" from The Jungle Book film, which was also released 50 years ago this year and which I also included in my 2014 London musical revue: A Spoonful of Sherman. And, from The Happiest Millionaire itself, they sang "Fortuosity" and, as their finale they sang, “It Won’t Be Long Til Christmas”, which sadly had been cut from the movie – but is still a wonderful, poignant song, nevertheless.

Indeed, I would go as far as to say that I think “It Won’t Be Long Til Christmas” is one of the most beautiful songs the Sherman Brothers ever wrote. Unfortunately, it had to be cut as the film was deemed to be running too long. But for this special occasion, I commissioned Rowland Lee, who orchestrated my show, Bumblescratch, to arrange a brand new, barbershop quartet version for The Dapper Dans to sing. It’s my understanding that the audience loved it.
Back to news 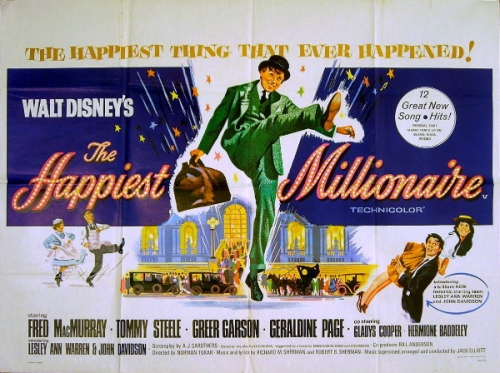