'Intimacy is the show's secret weapon': @RobbieSherman talks musical legacy and A Spoonful of Sherman at Live at Zedel.

2017-08-24T08:25:59+00:00
Broadway World Interview: Robert J. Sherman Talks A SPOONFUL OF SHERMAN with Cindy Marcolina.
Songwriter Robert J. Sherman just ended a run of his latest show A Spoonful of Sherman at Live at Zédel. He discusses the genesis of the cabaret and his family's musical heritage.

How did A Spoonful of Sherman first come to pass?

I was the editor of my Dad, Robert B. Sherman's autobiography, Moose: Chapters from My Life, which was released posthumously, about a year after he died. When it came time for the UK book launch, it seemed a bit of an empty venture to plan a book signing with him not there and just me as the editor signing the books.
I was also concerned that people might feel misled, as my name is so similar to his that they might arrive at the book signing, expecting to meet "the legendary songwriter" only to be disappointed, learning that he had passed away.
Then came a spark of inspiration. I thought, why not create a sort of musical tribute, a 'happy memorial' to my Dad, which is what A Spoonful of Sherman very much became. Throughout the show, his book was featured atop the piano. And after the show, anyone who wanted one, could buy a copy. Instead of one book signing, we had an entire run of them!
So, that's what we put together in 2014. I created the show in collaboration with musical director Colin Billing. We put the first incarnation of A Spoonful of Sherman on at the St James Theatre (now The Other Palace), and the show garnered all sorts of unexpected praise from the press, as did the Original Cast Recording which was released the following year. The show's director, Stewart Nicholls, has had a big influence on how the show has evolved since its first outing.

How would you describe the songs included in the show?

The show is populated with both familiar as well as lesser-known songs. I wanted to surprise the audience with great songs that they might not have realised were written by members of my family.
You know, a lot of people don't realise that beside my father and uncle being songwriters, my grandfather, Al Sherman, was a songwriter, and a pretty darn good one. So we tried to incorporate highlights from the past 100 years of my family's library.
The show starts off with some of my grandfather's Tin Pan Alley hits. And then we migrate to The Sherman Brothers catalogue. Of course, my father and uncle's songs are very famous, but what most people rarely realise is that the same guys who wrote Mary Poppins also wrote "You're Sixteen", which went to #1 on Billboard's Hot 100 Chart with Ringo Starr in 1974.
We also do a few of my own songs too - like songs from my shows Bumblescratch and Love Birds. I am both pleased and relieved that audiences have been giving the same level of positive response to my material as they have to my progenitors'.

What was your process for choosing the songs?

There's a list of songs that I knew we had to include. For example, you can't do a Sherman show and not include songs from Mary Poppins and The Jungle Book. To not include "It's A Small World" in at least one of the encores might be punishable by death. It's sacrosanct!
But if you only include the shiny, famous numbers, to the exclusion of all else, then you rob the audience of the most important aspect of the theatrical experience... New discovery! There are some wonderful, lesser-known gems which A Spoonful of Sherman reveals to its public and I'm very proud of that.
To only sing the big hits (of which there is an abundance) could lead to an ultimately predictable and uneventful evening, in my opinion. So the general structure has us starting big and ending big, but in between we sprinkle in the lesser-known songs as well. We like to keep 'em guessing, I guess you could say.

What's the narrative of the cabaret?

We had to change the through-line a bit. In 2014 it was purely my father's story, told through the music my forebears and I created, respectively. And in a very real way, this was the music that surrounded my dad in life.
In that 2014, earlier incarnation of the show, my dad was the protagonist, the focus of the story I was trying to tell. In 2017, though, I knew we needed to shift the focus so that it also incorporated my uncle and grandfather's stories too.
So the protagonist shifted. The new protagonist became "THE IDEA of The Sherman Brothers". It sounds like a peculiar sort of protagonist, I suppose - even to us "writer types".
But when you realise that it was very much my grandfather's mission to have his two sons collaborate on songs together, very much in his footsteps, then you understand that the "idea of The Sherman Brothers" has a life and a personality of its own. The success or failure of this idea becomes the focus of the new narrative. I suppose the fact that I continue in the family business means that the story has an uplifting ending. Of course it helps that people generally have a positive response to my songs as well!

How does the legacy of a family like yours impact your work?

I am fortunate to have been the recipient of more than 100 years of distilled songwriting wisdom. There are lessons in songwriting which I learned from my father, which he once learned from his own dad. It's a tremendous tradition and responsibility.
It's why I'm such an advocate of learning the craft of songwriting via apprenticeship. I believe that it's a one-to-one learning experience - not something best expressed in a classroom setting, for example.

What has it been like working with a new cast?

Every new cast member brings his or her own particular skills and talents with them to the run. What's a brilliant song for one performer might not be best suited for another - so it's important to be malleable and accommodating.
We're lucky with this show because we have so many great songs to choose from. Too many great songs to perform in a single evening, and too much great talent on one small stage for all that talent to be fully utilised in one show - although we do work the performers hard. They sing around 40 different songs in the show and so it becomes an excellent showcase of their talents.
The singers we've worked with on this run, Helena Blackman, Daniel Boys and Christopher Hamilton, are particularly talented and each brings a unique quality to the myriad songs and styles of music in the show. And people have been loving the show, night after night, just like when it first ran three years ago, so my best guess is that we must be doing something right!

Is there anything major you changed in the show relating to the new cast and staging?

Our new musical supervisor, Rowland Lee, has completely rearranged the music and he's done a fantastic job of it. Again, it's not an easy show to arrange due to the varied styles of music incorporated in it. Also, instead of the show being two acts with an intermission, the Zédel show is 80 minutes straight through (no interval), which affects the arch of the story I need to relay.
Instead of four singers on stage, like we had in 2014, now we have two singers (Daniel Boys and Helena Blackman) and a pianist/MD who also sings (Christopher Hamilton). The Zédel stage is a lot smaller than what we had in 2014.
But intimacy is A Spoonful of Sherman's secret weapon, so that's all right. Still, there's nowhere to hide in this incarnation of the show - and with the smaller cast, there's no one to hide behind!

I'm delighted to report that the response each night has been overwhelmingly positive. And we've received great critical praise as well. I was concerned that we meet expectations with this show. It had a lot to live up to. And as we're now nearing the end of the Zedel run, I think I'm safe in saying, "Mission accomplished".
I think that the show's success comes down to three things: great cast, great songs and a compelling story. I hope that doesn't sound too immodest. I think that the show is interesting because so much of the music is really, so much of all our childhoods. In my narration I point out that during their years at Disney (i.e. the 1960s) The Sherman Brothers wrote, what has been coined, "The Soundtrack of our Childhoods."
Gore Vidal once said that the most interesting things that happen to us, happen to us before we're 20. So for that reason, it's a very personal show to people. Again, intimacy is this show's friend. After a show, I've had people approach me, unable to speak, they were so overwhelmed by the experience. It's a bit of a phenomenon.

Do you have any plans for the future life of A Spoonful of Sherman? Perhaps a tour?

We are currently developing an enhanced version of the show which will allow us to share the story of my family throughout the UK and internationally. We're close, but we're not quite ready to officially announce anything just yet.
But until we do, we have a wonderful Original London Cast Recording of A Spoonful of Sherman available on Amazon and iTunes. The record was produced by my friend, Nick Lloyd Webber (also a third generation songwriter from an iconic songwriting family). You haven't seen the last of A Spoonful of Sherman, that's for sure! 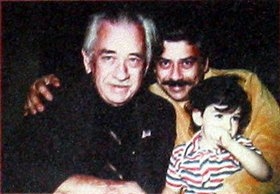