Four Melbournes: The redemption of the unredeemable

BUMBLESCRATCH is an allegory in that several of the characters represent aspects of the protagonist's personality. Even London itself behaves as a reflection of Melbourne. The crumbling, disease-ridden city provides an appropriate backdrop. I sometimes refer to “The Four Melbournes”which exist in the world of the story…

... There's Melbourne himself (Darren Day); then Melbourne’s childhood, his innocence, represented by “Perry” (Ilan Galkoff); adolescent Melbourne, represented by the late-teenage rat “Squabbler” (Teddy Moynihan), who is hormonal and temperamental; and finally, the legendary “Hookbeard” (Michael Xavier), who represents what Melbourne could become if he’s not careful.
When Melbourne learns to accept himself, and realises that, while he may not be your typical hero, he is as God created him, he learns to love himself and, in turn, learns to love another. He finally commits for real to his soulmate, his fiancée Bethesda.
The point is that what Melbourne really wants, more than anything, is to tell his stories, and he's very good at doing it! He tells wonderful tales that get him out of scrapes. Everything that happens is about him relaying his gruesome sagas. But storytelling is also his purpose and, by the end he has discovers his true and ultimate tale, the saga of the Great Plague and Great Fire.  He knows who he is and what role in history he was destined to play.
The epilogue of the show is not sung; it's spoken. I wrote it that way on purpose. You might say it’s the reverse of what you’d expect from a musical. In BUMBLESCRATCH the moments of highest drama are spoken. I would tell you more, but then I would be spoiling the surprise.

“One day they will rebuild this town
And that, in turn, will crumble down
And when it does we’ll come back ‘roun’
to bumble through the black!
They’ll tell the tale which we supplied
How vermin burned– But never died
For ghosts and goblins still reside
‘Tween ev’ry nook and crack!
So onward unto Essex fly
Whilst London drones its lullaby
We’ll bide our time, and multiply
And plan out our attack!
From the sewers we will spout
A billion brethren prowling ‘bout
We may be down – We may be out.
But We Will Be Back!” 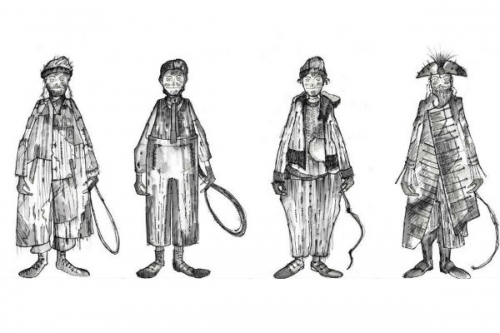