Every picture tells a story: The photos in Moose

In the third of a series of blogs to tie in with the release of the MOOSE audio book, Robbie remembers how much effort - and emotion - went into collecting the photographs that form such an important part of his father's story.

It was extremely important to my father that we include the photos in MOOSE. Among my dad's many passions was photography. He was an excellent amateur photographer, and so was his father before him.  My grandfather first purchased a Brownie camera in 1921 and the passion for photography began in my family.
Following a hiatus, in 2009 we revisited the manuscript.  Basically, the book was done and it seemed that my father was satisfied with it.  But then Dad said: “I want there to be photographs.  LOTS of photographs!”. Adding pictures though, was no small task! Going back through the archives, we had over 15,000 photographs to choose from!
It took quite awhile to sort through them all.  In 2011 my father suddenly fell ill.  When he was in hospital, I suggested we release the book without the photos, but he insisted that we waited until it was just right.  I feared that he might not survive to see the book released if we waited.  Sadly, I was right.
About a year after Dad passed away, I returned to sorting through the photos, and finished editing the book.  It was one of the most difficult things I ever had to do.  It prolonged the grieving process, but I felt compelled to fulfil my father’s final wish.  By far the most emotional part of seeing MOOSE realized was completing the photo pages. More or less a page of photos represented about a year of my Dad’s life. In the end, there were exactly 86 pages of photos and, coincidentally, my father was 86 years old when he died. It wasn’t planned, it just came out that way.
I’d look at the photos we’d chosen, trying to crystallize thoughts of his in an image.  I’d take notes, and then touch up the images I had chosen.  Some of the photo pages had been completed in collaboration with my father, but about half of them hadn’t even been started.
It took me roughly a day and a half of work per page to do this. I’d enlarge a picture, remove the little scratches and blemishes, but while I was working on the respective photos, I’d be transported back to whichever year I’d happen to be working on. To happy times and some not-so-happy times. I felt as though I relived every year of my father’s life, one photo at a time.  It was fascinating and gruelling all at once.

The audio book of MOOSE: Chapters from My Life can be ordered via Amazon here and via Itunes here. 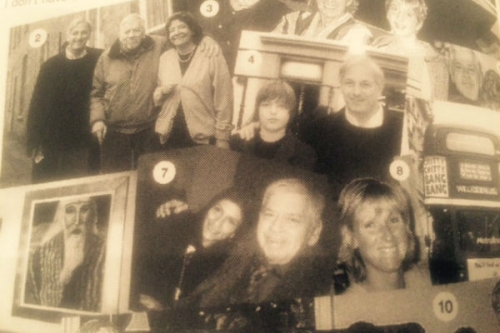