The audition process for BUMBLESCRATCH is nearly complete and, to start, I'm delighted to be able to share with you the names of our new stars, who I'm sure many of you will recognise: Darren Day, Michael Xavier and Jessica Martin.

The news is out! Darren Day will return to the West End musical stage to play plague rat - from "love rat" to plague rat? - Melbourne Bumblescratch in our special charity gala presentation of BUMBLESCRATCH on Sunday 4 September 2016 at 6.30pm at the Adelphi Theatre.

Performing alongside him are two West End stars very much of the moment: Michael Xavier, just seen opposite Glenn Close in Sunset Boulevard at the London Coliseum, with Jessica Martin, most recently seen in Elf at the Dominion Theatre, double-roling as Bumblescratch's girlfriend Bethesda and Widow MacGregor.

Read more about all three stars, and watch a video I made with Darren Day on his very first day in rehearsals at the piano, on the Bumblescratch website. It was really thrilling to hear Darren - who, by the way, is a "proper Londoner", so no worries at all with accents! - sing my songs.

I can't wait to see Darren, Michael and Jessica perform on opening night with the full cast, the rest of whom we'll be announcing very soon.
Back to news 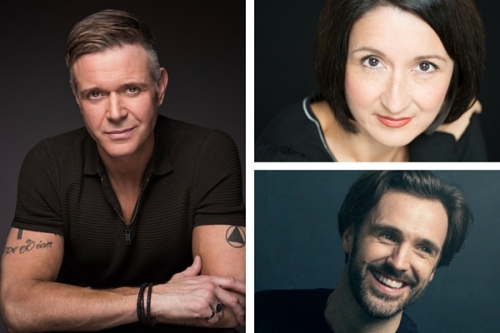