I'm a bit of a history buff so it was fun researching 17th-century London for BUMBLESCRATCH. I went on several walking tours of London and read a few books, including Peter Ackroyd’s London, excerpts from Samuel Pepys’ diaries and Peter Jackson’s London Bridge: A Visual History. Did you know there have been about seven London Bridges since the Romans built the first one about two thousand years ago?

The marvellous thing about writing a story set in London is that the history of the city is more colourful than anything you could make up.
Real-life London locations that feature in BUMBLESCRATCH include the Tower of London and Thomas Farynor's bakery, which is where the Great Fire started – and where the Monument to the fire stands today.
The action takes place in the darkened mews and shadowy sewers of 1660s London. And there were some scenes, which I’ve since decided to cut, that were set in the London dungeons. There's also a very interesting place, Seething Lane, which is in between all these locations. It's where Samuel Pepys lived. There's a church in Seething Lane called St Olave's Church.
A couple of centuries later after when my story is set, Dickens wrote about St Olave's Church. In Uncommercial Traveller, his 1862 book of literary sketches, Dickens referred to it as “Saint Ghastly Grim”.
It's a fascinating church, dating back to Viking times. Olave was a Viking and definitely no saint. He came here, raping and pillaging, until a deal was brokered with the scoundrel. The bargain was: "If you leave this land, we'll get dispensation from the Pope to make you a saint and that will secure your legacy." To this day, on the door to the churchyard, you'll find three skulls, which are Viking symbols.
Of course, St Olave’s has been modernised over the past 800 years, but I still love the grimness of the London that it typifies and it was thematically important to the story as well.
Hookbeard (played by Michael Xavier), who is Bumblescrath’s guardian angel, was the pet rat of Olave the Red. Hookbeard’s curse, for his myriad Viking-Rat sins, is that he must roam the Earth with no memory of who he was – other than knowing his name. Ironically, Hookbeard is terrified of graveyards and ghosts – not realising that he himself is a ghost. In one number Melbourne says to him, "But you are a ghost!". Hookbeard covers his ears blaring out the words: "I cannot hear you." This becomes a fun Gilbert and Sullivan operetta moment in Act Two. 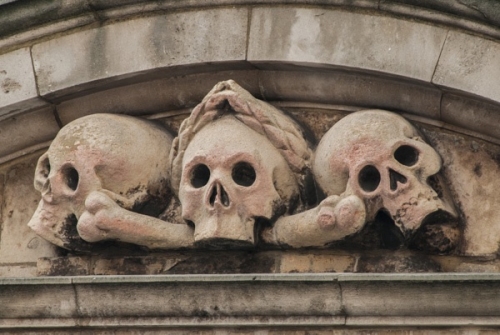