Bumblescratch gets West End premiere on 4 September at Adelphi Theatre

We're hugely excited to officially announce that Robbie's musical BUMBLESCRATCH will receive its West End premiere in a one-off gala concert on 4 September 2016, commemorating the 350th anniversary of the Great Fire of London. Also today, we've launched the show website at www.bumblescratch.com. Please check it out! Here's the press release...


On Sunday 4 September 2016 at 7.30pm there will be a very special Gala Charity Concert of Robert J Sherman’s new musical BUMBLESCRATCH at the Adelphi Theatre. This performance is in aid of Variety – The Children’s Society and is specially staged as part of commemorations for the 350th Anniversary of the Great Fire of London, which raged in the East End for four days from 2 to 5 September 1666.

BUMBLESCRATCH is a new musical comedy written by Robert J. Sherman. Set in London during the Great Plague of 1665 and the Great Fire of 1666, it is told from the perspective of a demented, lascivious plague rat named Melbourne Bumblescratch, who demonstrates his unique and twisted love affair with the ancient city through telling his marvelously gruesome tales.

BUMBLESCRATCH had a workshop presentation at London’s Network Theatre in 2013, when Olivier Award winner Paul Baker took the title role and the lead child role of Perry was played by Sebastian Croft. Sebastian – now a rising star who is currently appearing onscreen in Game of Thrones (Young Ned Stark) and Penny Dreadful and onstage in Trevor Nunn’s production of King John at the Rose Theatre, Kingston – is this week helping to launch BUMBLESCRATCH with an exclusive video announcement.


Next month, Sebastian will also perform sneak-peek extracts from BUMBLESCRATCH at the annual WEST END LIVE festival (18-19 June 2016) in Trafalgar Square. And on 4 September, he’ll be amongst the celebrity guests attending the gala for the musical’s West End premiere. This major concert presentation will feature a stellar line-up, with star casting to be announced soon.

BUMBLESCRATCH has music, lyrics and book by Robert J. Sherman, continuing the enduring legacy of his father and uncle, Robert B. and Richard M. Sherman, a.k.a The Sherman Brothers, the songwriting duo behind childhood classics including Mary Poppins and The Jungle Book. It is directed by Stewart Nicholls, who also collaborated with Sherman on the critically acclaimed Love Birds and A Spoonful of Sherman.

“It was always our hope that we could make this evening even more special by using it to support a charity. So we’re absolutely delighted that Variety, the Children’s Charity, has accepted our invitation. Variety not only does amazing work for sick, disabled and disadvantaged children throughout the UK, but it is of course widely known as 'the showbiz charity' with a strong association with the entertainment industry that stretches back more than 65 years. There could not be a more appropriate charity to benefit from the start of the journey of what we believe will be a smash-hit new musical.”

“It’s so exciting for Variety, with its roots firmly in showbusiness, to be a key part of this evening when Robert J. Sherman’s BUMBLESCRATCH gets its first appearance in the West End. It’s especially appropriate, of course, for Variety that the show has a young person in one of the lead roles. We’re very grateful to everyone involved in the show, as there are so many children and young people all round the country whom we assist and this kind of support is invaluable to our work. We are all really looking forward to 4 September; now all we have to do is gear ourselves up to feeling warm towards a rat!” 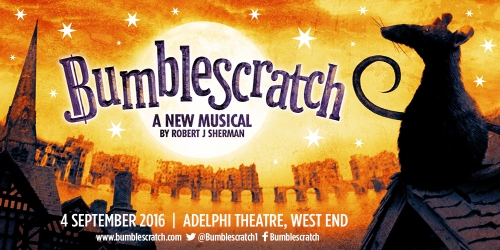