BUMBLESCRATCH is a new sung-through musical comedy with book, music and lyrics by Robert J. Sherman. Set in London during the Great Plague of 1665 and the Great Fire of 1666 and told from the perspective of a demented, lascivious plague rat named Melbourne Bumblescratch, who demonstrates his unique and twisted love affair with the ancient city through telling his marvellously gruesome tales.
BUMBLESCRATCH played a charity concert at the West End's Adelphi Theatre, London on 4th September 2016, directed and choreographed by Stewart Nicholls, musical direction by Tom Kelly, and orchestrated by Rowland Lee.
The London Concert Cast Recording features the original band and cast, was recorded at Angel Studios, and stars West End performers Darren Day, Jessica Martin, Michael Xavier and Ilan Galkoff, plus comes complete with a full colour booklet including productions photographs and lyrics.
Robert J. Sherman comes from an illustrious line of songwriters spanning more than four generations. At 16 he became one of the youngest songwriters ever invited to join Broadcast Music Incorporated and is an alum of their Lehman Engel Musical Theatre Workshop. At 18 he wrote songs for the musical A Christmas Held Captive (Beverly Hills Playhouse), and he is currently writing an animation musical film Inkas the Ramferinkas. In 2014 Sherman narrated and produced A Spoonful Of Sherman (St. James Theatre), which celebrated his family song-writing legacy, and his original musical Love Birds played to critical acclaim at the Edinburgh Festival 2015 (Pleasance Theatre). Both recordings are also available from SimG Records.
BUMBLESCRATCH is available to pre-order in physical format from www.SimGProductions.com now (and available digitally in early 2017), and will be released on Monday 19 December 2016.

“At the core of this big, goofy, ambitious show beats a warm heart, with memorable characters and a delightful score... [Bumblescratch] is full to bursting with novel ideas.” Craig Glenday, Musical Theatre Review ✭✭✭✭

“Some of the best loved musicals of all time have come from the Shermans. They are true classics, and I think Robert J. Sherman’s Bumblescratch could be on its way to being just that. Darren Day really takes the title role with both hands, and I can’t imagine a better or more deserving actor. This is the same with Ilan Galkoff, (as Perry) a young and exceptionally talented performer. For a boy of 12, he is an extremely impressive force to be reckoned with ... the pair are completely heartwarming ... I think Bumblescratch holds its own in a genre of well known and loved musicals, and I am excited to see how it will develop, as I think it could perhaps become a new classic.” Kara Alberts, West End Wilma ✭✭✭✭ 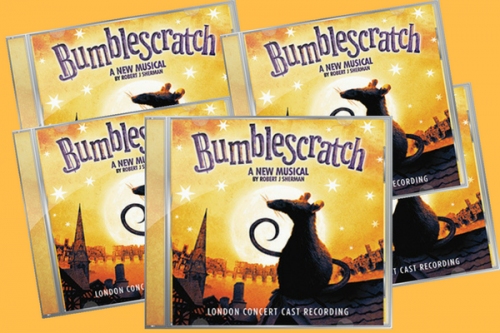