Currently in development, Inkas (the Ramferinkas) will be an 81-minute, feature-length, family-oriented, animated musical film starring a loveable prehistoric dove named Inkas, and his mischievous dinosaur friends. The film will feature songs written by the Sherman Brothers, with a screenplay by the Sherman Brothers and Robbie Sherman.

Around a hundred and fifty million years ago, during the Jurassic age, we meet a spirited little prehistoric bird named Inkas. He is a Ramferinkas who can’t fly straight: like most of the animals of this time, evolution still has to work the kinks out of him. A natural zig-zagger when he flies, when one of his wings goes up, the other goes down.

He’s also very small relative to his enormous vegetarian friends like Dinah the Apatosaur and the pompous Monty Brontosaur. The friendly vegetarians live in the Lush Green Valley, nestled under the protective shadow of the slumbering Blue Volcano.

Inkas is the valley’s official “weather bird”, which means that it's his job to range far and wide to determine the coming weather for his agrarian friends.

On his way to work, Inkas encounters a lost toddler Anklysaur named Spencer whom he befriends. From a mountain peak, Inkas observes a low-flying cloud approaching on the desert mesa below. Mysteriously, Inkas’s lodestone medallion suddenly turns red-hot. Inkas flies into the cloud, discovering a pack of ferocious looking carnivorous dinosaurs who are marching on a trek to find meat...

Can Inkas work out a plan to save Lush Green Valley from these meat eaters? 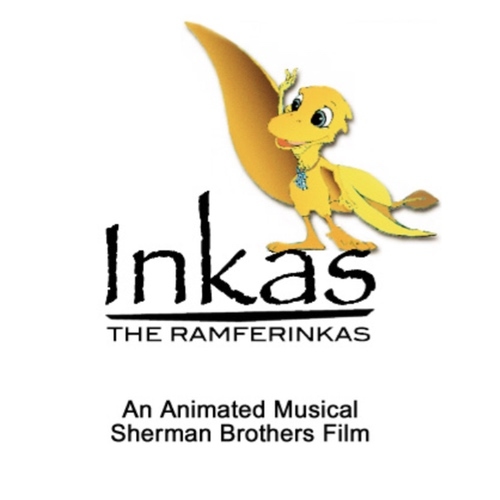